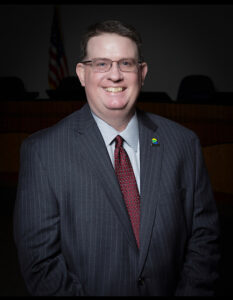 Mr. Jaworski was raised in Highland Village during the 1970s and 1980s, leaving the city to serve in the United States Navy as a linguist and intelligence collection analyst from 1993 to 2000. He is the first person raised in Highland Village to be elected to the City Council. Mr. Jaworski earned a bachelor’s degree in Business Administration and a master’s degree in Management with an emphasis on strategic leadership. Mr. Jaworski currently serves as the manager of the cyber security vulnerability and patch management team for HMS, a healthcare analytics and technology company.

Mr. Jaworski and his wife, Gretchen have been married for sixteen years and have three children – two boys and one girl. Their oldest son Shane serves in the United States Navy in Virginia while their youngest son Reagan attends Marcus High School and daughter Emily attends Highland Village Elementary. Mr. Jaworski and his family attend St. Phillip’s Catholic Church in Flower Mound.